When he met with members from 50 local Arab groups, he said, he was met with similar concern. We know that people will want to strike out, but we need to remind them, and ourselves, that if we are Americans, this is an attack against us too. He has family in Jerusalem, he said, and in spite of some of the unnerving images of celebration there, Hanania believes that most people recognize these acts as insanity and condemn them.

Those who do not do not understand what has really happened. About Us. Brand Publishing. Times News Platforms. Real Estate. Facebook Twitter Show more sharing options Share Close extra sharing options. Reed Johnson. 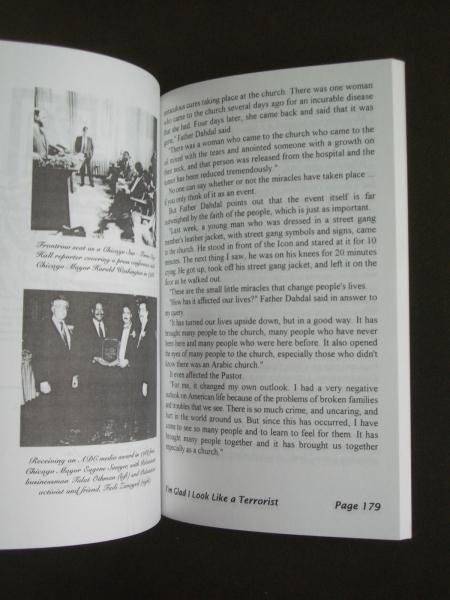 Report incorrect product info or prohibited items. Ray Hanania. Pickup not available. Add to List. Add to Registry. About This Item We aim to show you accurate product information. Manufacturers, suppliers and others provide what you see here, and we have not verified it.

e-book Im Glad I Look Like a Terrorist: Growing up Arab in America

They will not know what I know: that the world in which they are growing up is indelibly marked by this singular tragedy. I sometimes wonder: What would I tell them if I could? They will only ever know the paranoid and terrorized world that the Sept. Only know getting onto an airplane as a hellish experience. The hyper-militarized borders and selective detentions and enhanced interrogations, all to be taken as ordinary. The constant surveillance of the national security state.

The endless secret wars, waged in the cover of night, in distant places where the victims are invisible. Because these children will hold blue passports, they may never fully understand the extent to which Sept. At first, there were unlawful detentions and deportations of undocumented people. Soon, a Republican president was deceiving the country and the world into war in Iraq that would lead directly to the chaos and racial hatreds we see today. The government tortured people and held them in secret prisons.

And then, the double tragedy: young American soldiers — the Sept. You had to choose a side: Were you with us, or with the terrorists?

The outright manipulation of the people — assisted at times by a credulous media — all coarsened the country, turning a once proud and optimistic nation into a cynical and polarized place. A spiritual pallor descended over America. If the United States were to have deliberately tried to make the worst possible foreign policy choices in the wake of Sept.

America invaded one country that had nothing to do with the attacks, and was drawn into a conflict with a tribal-extremist group of another country that could go on in perpetuity.

I'm Glad I Look Like a Terrorist: Growing Up Arab in America

We were told that America would make no distinction between terrorists and the nations that harbored them. But 15 of the 19 hijackers were from Saudi Arabia, and there is credible evidence that at least parts of the Saudi government — business partners of both the Bush and Trump families — were aware of the coming attacks. Nothing but more business deals were done.

There was a hidden cost to all this enormous energy expended on war and bombings. Not just the racism and xenophobia internalized by brown-skinned children who became adults in the shadows of this mass tragedy. All the policy focus on war meant there was too little time spent on the cataclysmic challenges of the 21st century: climate change and wealth inequality, both of which will plague our generation long after the warmongers have disappeared. This is not to exculpate the terrorists or their ideology. For them, I reserve a special fury, just as their actions induce in me a special shame.